Do you have recipe pet peeves? If you do, I’d love to hear them in the comments. I have a few. I don’t love when something is listed in a smaller unit of measurement than necessary (don’t say 4 tablespoons, say ¼ cup, for example). I prefer when something says the whole amount need in the ingredients list rather than list it 3 times (say 1 teaspoon of salt, divided). But those are mostly my preferences.

I do have conflicting pet peeves, actually. I hate when recipes call for an amount of cooked meat, like chicken. I rarely have precooked chicken just sitting around. And without the steps in the recipe, sometimes I find myself half way in and realize I need to cook the darn chicken. BUT another pet peeve is to have a million steps to make something that is just one part of a larger whole that also has a million steps.

Unfortunately, this recipe hits those pet peeves. There is no way around it. Enchiladas need cooked meat. BUT, the good news is this recipe for meat is super easy and delicious AND makes more than you need for the enchiladas (or easily does) so you could have sandwiches, meat on salad, etc for awhile afterwards. So forgive me for doing what I actually hate myself. The end result of these is pretty darn delicious! And please pardon the photo. I tried several times and couldn’t get an appealing shot of enchiladas. While tasty, they aren’t photogenic. 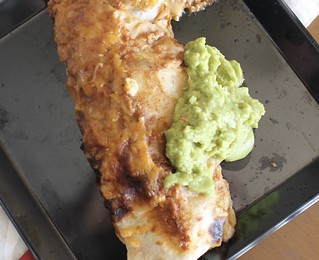 1. Preheat oven to 275 degrees F.
2. Combine salt through cumin. Rub on all sides of chuck roast. Place in a shallow baking pan. Cover with onions, broth, and tomatoes. Cover pan with a lid or with foil.
3. Bake for 3-4 hours, or until meat is tender enough to pull apart with a fork.
4. Remove meat and shred. Pour juice/tomato mixture from pan into a saucepan. Heat over medium heat to a boil. Simmer for about 10 minutes, until thickened. Puree. Add ½ cup sour cream. Set aside.
5. Heat a large nonstick skillet with oil over medium-high heat. Add onion, saute for 2-3 minutes. Add spinach and water. Cover with a lid. Cook 2-3 minutes, until spinach is wilted, stirring as needed. Remove from heat. Add shredded beef to spinach mixture.
6. Preheat oven to 350 degrees F.
7. Spoon a small amount of tomato sauce into the bottom of a 9×13 baking dish. Fill tortillas with beef mixture and cheese, placing in pan seamside down. Reserve ¼ cup cheese for topping. Pour remaining sauce over the top and sprinkle with cheese.
8. Bake for 15-20 minutes, until sauce is bubbly and cheese melted.

Recipe notes: I use my Traeger to cook the meat at 275. If you have a meat thermometer, you want the meat at about 195 degrees F. My meat was quite frozen the last time I made this, and it only took 3 hours to get there. So I recommend watching it. I’ve cooked thawed meat for over 3 hours to get it tender as well. Also, it seems like a lot of sauce. I’ve put all of it and not put all of it. More sauce is always better.

1 thought on “Beef and Spinach Enchiladas”