I suggested pumpkin pancakes as a Thanksgiving breakfast earlier this week.  For some of us, that may be hitting the pumpkin note too much in one day.  Especially since Thanksgiving is almost the end of the pumpkin craze season for desserts.  Or maybe that seems like too much work on a day that will be full of cooking.  I hear you.

These breakfast rolls do require a fair amount of effort. BUT…that effort can be expended days ahead of time.  You could make this right now if you wanted them for Thanksgiving.  These rolls freeze beautifully and are all the deliciousness of biscuits and gravy plus an omelet all combined into one.  This is a a good recipe for feeding a crowd.  Plus it is a substantial breakfast, which should keep your crowd full until your turkey “dinner”, which I find for most people is consumed somewhere between 2-4 pm. 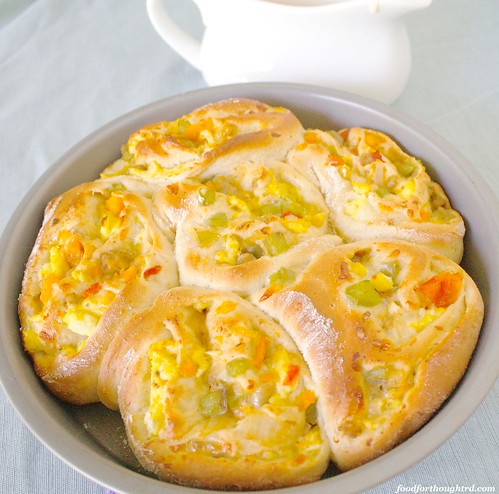 1. In a large bowl, mix sugar, yeast, oil, and water until dissolved. Cover and let stand in warm place for 15 minutes.

3. Lightly grease bowl, and let dough rise in a warm place for about 30-40 minutes.

4. While dough is rising, whisk together egg, black pepper, and milk. Scramble until fairly dry, but do not overcook. Set aside.

5. Brown sausage in skillet. Add onion and pepper. Saute 3-5 minutes, until softened. Add tomato; cook until most of the liquid has evaporated.  Set aside.

6. Roll out risen dough on a lightly floured surface. Roll into a rectangular shape until it is about ¼ inch thick. Evenly sprinkle eggs, sausage mixture, potatoes, and cheese over the top. (See picture below.) Roll up tightly, beginning on long side. Roll gently so the dough doesn’t rip. Pinch to seal. Cut into 1 inch slices.

7. Place rolls in lightly greased pans, slightly apart. They should touch each other as they raise. Let rolls rest in warm place until about double in size, about 30 minutes. Meanwhile, preheat oven to 400.

Recipe Notes: You can adjust the vegetables and meat to whatever your preference. If you use tomatoes, it is important to cook out most of the liquid. Otherwise you’ll have soggy rolls, which is gross. Frozen hashbrown potatoes would work well, but you’d want to cook them with the other veggies to get out any water. You could use all whole wheat flour, but it makes for a heavier feeling roll. I don’t usually include any process photos, but I’m including one below of just before rolling the dough. If you’ve made cinnamon rolls, this is not covered as completely as cinnamon rolls are. But it works fine. This filling is more substantial. Also, don’t roll your dough as thin as I did in the picture. It was hard to keep it from breaking from the weight of the filling. 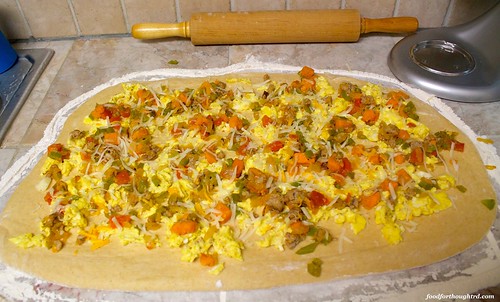 Tips on freezing: Freeze rolls in pans before second raise. When ready to eat, place in fridge overnight to thaw. In the morning, let sit uncovered on counter for about 30 minutes. Bake in 400 oven for 20-25 minutes.

Recipe Source: roll dough adapted from a cooking class I took in college; filling ideas and freezing adapted from here