Have you been getting take out during the pandemic? We have occasionally. Our restaurants haven’t been as closed as some places, so we haven’t had to stick to take out. Have you had good experiences? I will admit, we have had mixed success. Our main take away is that there is a reason that pre-pandemic mostly pizza and Chinese food were takeout/delivery fare. Other foods just haven’t done as well for us. By the time we eat, the food is cold or the texture is off or something. (If you’d had good luck, please share in the comments. I’m open to trying new places.)

Oddly enough though, we don’t get pizza that often. Mostly, we do homemade pizza. And if I’m making homemade pizza, I’m making “different” pizza. Why make a plain cheese or pepperoni? I can get that for $6 at Domino’s or Little Caesar’s. We do a lot of barbecue chicken, taco pizza, white sauce pizza. I love to throw veggies on as much as I can – see if I can sneak them past the kids. This one doesn’t work for that, but is SO good. I got the original recipe from Ina Garten’s new cookbook – Modern Comfort Food. It seems a little crazy to cover a pizza with Brussels sprouts, but I promise it works. And is really really good! Trust me, this makes eating veggies fun. 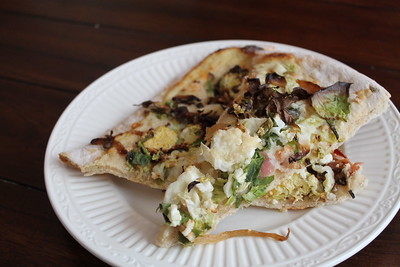 Recipe notes: You could use the white sauce from this pizza recipe. However, I would think the pizza might need a bit more cheese then. If you wanted this to be more vegetarian, you could easily omit the bacon. It just adds a nice flavor and texture. Make sure to really thinly slice the Brussels sprouts. You can use a mandolin or food processor to do this quickly. I just use a chef’s knife because I don’t want to get more dishes dirty. A trick someone taught me is to chop like you think you won’t even cut anything off. Using “bear claw” fingers, you can put your fingers close to the edge to guide the knife down into very thin slices. Watch your crust for level of doneness. Some of the Brussels sprouts leaves might brown/blacken. That is fine.