Right after I got married, I got my first real job. I actually needed to cook dinner consistently for the first time AND didn’t have a lot of time to cook. I found myself turning to my slow cooker a lot. But we could only eat so many meals doused in cream of chicken or mushroom soup, so I began to look around for other ideas.

The great thing about these peppers is that they are very adaptable. Change up the ingredients as much as you’d like – corn, different beans, olives, different peppers, etc. The only downside I have found is the timing. If you leave these to cook for a long time, they kind of fall apart. They still taste great, but the presentation leaves something to be desired. I do think these taste better than peppers in the oven though, since they have more of a sauce. 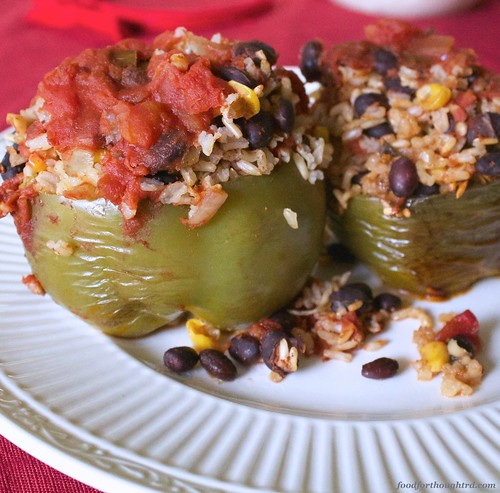 1. Cut tops off peppers and remove seeds, stems, and cores. Dice pepper tops and place in a medium bowl.

2. To pepper tops, add onion, beans, corn, jalapeño, cheese, rice, taco seasoning, and half the can of tomatoes. Stuff peppers with mixture. Place peppers in crockpot. If you have an filling left over, pour it over the peppers in the crockpot.

Recipe Notes: You can use any color of bell peppers. I tend to prefer the flavor of red or yellow peppers, but green are usually cheaper. The recipe originally had ground beef instead of beans. It was tasty that way, but I like the vegetarian version. You could also split the cheese in half, mixing half in the stuffing and sprinkling half on top. I have found the cheese on top often gets lost when you are serving, so I don’t bother. Also, I ALWAYS have extra stuffing. If you could fit an extra pepper or so in your crockpot, you might want to use them.