On a recent trip to California, a couple family members and I branched out from the crowd going to the traditional chain restaurant. We found this little taco shack a few doors down that was phenomenal. They only served tacos and shakes, but they did both of those things incredibly well. We tried several different varieties, but my favorite was the fish taco.

I was so inspired that I came home and made some. While maybe not on the same level as the restaurant, these tacos were killer. I ate the leftovers for days as tacos, salads, quesadillas, etc. The slaw could really be served as a side on its own. The salsa you may recognize from my polenta poblanos; it is my favorite. Go fire up your grill and make these tacos. You won’t regret it. 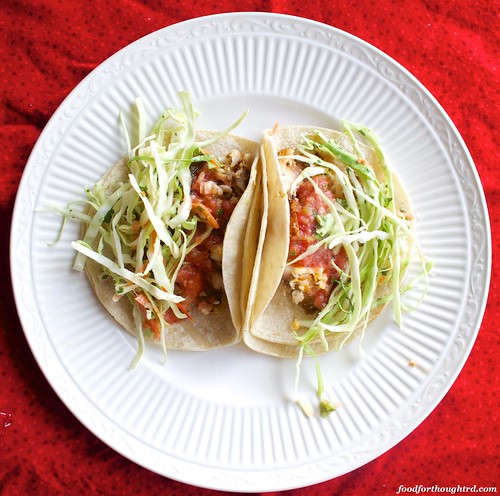 1. Dry fish with a paper towel.

3. Preheat grill to medium-high heat. Place fish onto hot grill. Grill for 4 minutes on the first side. Flip. Cook on second side until internal temperature reaches 145 degrees F. Remove from grill and let rest.

4. Grill tortillas until warmed on each side.

5. Flake fish into large chunks. Serve in warmed tortillas with slaw and salsa.

1. Combine sour cream, 2 tablespoons of cilantro, lime juice, jalapeño, and sugar in a food processor or blender. Puree until smooth, adding water in small amounts as needed to thin to desired consistency.

2. Combine cabbage, carrots, onion, and remaining cilantro in a large bowl. Toss with dressing until well coated. Let sit for at least 30 minutes before serving.

1. Toss tomatoes, jalapeño, and red onion in olive oil. Grill on hot grill for 5-10 minutes per side, until nicely charred.

Recipe Notes: The cook times for the fish anticipate a thinner fish fillet. If your fillets are thick or frozen, you will want to increase the time on the first side. Just check your temperature. The amount of tortillas you need depends on your preference and the durability of your tortillas. I find corn tortillas, even when warmed, to be a bit brittle. I served mine doubled up to help prevent taco breakdown. Be warned that this slaw really can get spicy, especially the longer that it sits. Also, it will seem like it doesn’t have enough dressing, compared to traditional slaw. You want a crunchy slaw on top of you taco, so slightly underdressing is good. Also, it will soften more the longer it sits. The slaw recipe will also make way more than 4-6 servings for tacos. If only used for tacos, it would probably serve 8-10. Enjoy it as a side dish on another day. Same with the salsa.