Spring is a lovely time. Not only is the weather nicer, but some of my favorite vegetables are in season. Asparagus, peas, sugar snap peas, and artichokes are all delicious, and so much more affordable this time of year. The season is brief, so you have to eat them up while you can.

This risotto would be great with a medley of your favorite vegetables. The lemon brightens the whole dish up. Risotto is so creamy and delicious. It is so easy, too. I was intimidated by it the first time I made it. I still panic about halfway through every time, because it doesn’t seem to be thickening up. Then, it just magically goes from rice and broth in a pot to creamy, delicious risotto. 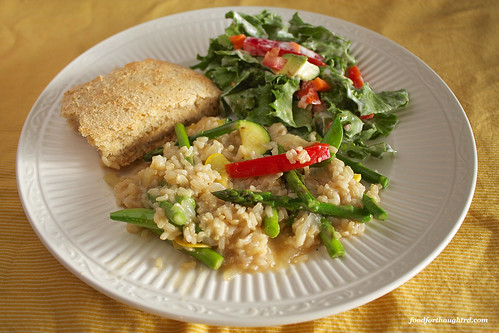 1. Bring a pot of water to boil. Boil rice for 15-20 minutes, until it is beginning to soften. Drain rice. If rice finishes before you are ready for it in the subsequent steps, spread it out on a baking sheet to cool.

2. Bring broth and water to boil. Reduce heat so liquid is barely simmering.

2. Heat 1 tablespoon of the olive oil in a large skillet over medium to medium-high heat. Add asparagus, peas, and red pepper. Saute 7-10 minutes, until vegetables are mostly tender. Remove to a plate.

3. Add zucchini and squash to skillet. Cook 5-7 minutes, or until mostly tender. Remove and add to other vegetables.

4. Add remaining tablespoon of olive oil to skillet. Add onion and saute until it begins to soften, about 3 minutes. Add garlic powder and saute for 1 minute more.

6. Add 1 cup of broth. Cook until liquid is mostly absorbed, stirring constantly. When there appears to be hardly any liquid left in the pan, add 1/2 cup more broth. Continue stirring and adding 1/2 cup broth when previous addition is absorbed. (It should take about 5 minutes after you add the first cup for the liquid to absorb; each 1/2 cup after that should take about 3 minutes.) After about 20-22 minutes, mixture will start to look creamy and liquid will be thickened in pan.

7. Stir in vegetables. Cook until reheated.

8. Remove from heat. Stir in parmesan cheese, lemon juice, and lemon zest. If you have any remaining broth, you can stir in 1/4 cup if the mixture has thickened up too much.

Recipe Notes: I have made this using brown rice as above and traditional arborio rice. Both are delicious. If you use arborio rice, you can skip step 1 and just add the raw rice after the onions and garlic powder. As I mentioned above, you can experiment with vegetables that are in season and according to your preferences. For the liquids added to the risotto, you traditionally would add 1/4 cup white wine first, rather than broth. I don’t usually have any wine handy, so I use broth instead. Also, you would stir in straight broth instead of diluting it. I prefer to dilute the broth to keep the sodium down. You can also use low sodium broth instead. I’ve just been having a hard time finding low sodium broth that I like. Also, I prefer the milder flavor; too much broth adds too many outside flavors to the rice. I like to taste the vegetables and the lemon, not just the chicken broth.

Low iodine adjustment:  Use salt-free broth or homemade broth made with non-iodized salt.  Eliminate the parmesan cheese in the cooking;  allow others to add it to individual portions.