I know I complained about all the pumpkin recipes on the internet a couple weeks ago. And I still stand by my statement that the food world should not revolve around pumpkin in the fall, even though it does. Most of them call for only part of a can of pumpkin, which is high on my list of pet peeves. If I’m opening something perishable, I better use all of it. And at the end, I often find myself saying, “This item isn’t better because of the pumpkin.” Pumpkin cinnamon rolls, pumpkin cheesecake brownie, pumpkin snickerdoodels…meh.

Breakfast food (minus the cinnamon rolls) is the one area I make an exception for. We ate this French toast before heading out the door to a fall festival last weekend, and it totally started our day off on the right foot. Super easy and super delicious. I know it only calls for a partial can of pumpkin, which I do hate. But this is the perfect way to use up remainder pumpkin from other recipes. 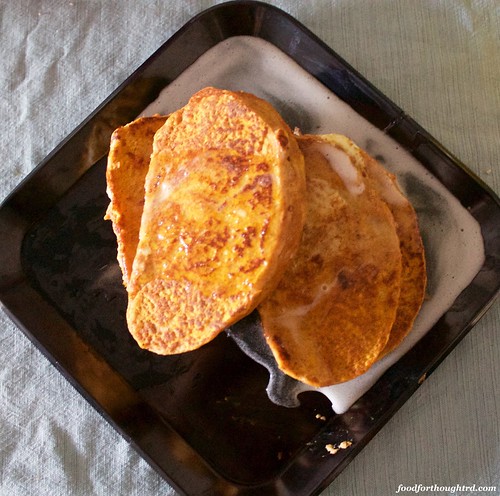 1. Preheat griddle or skillet to medium to medium-high heat.

2. Combine all ingredients except bread in a shallow dish.

3. Spray griddle with cooking spray. Dip bread in mixture until lightly coated on each side, scraping off any excess. Cook on griddle for 3-4 minutes per side, until lightly browned and cooked through. Serve warm.

Recipe Notes: I used whole wheat French bread for most of mine. I didn’t have quite enough, so I used sandwich bread as well. I liked the thicker bread better, but all of it was delicious and got eaten. I served this with buttermilk syrup, which made it an extra special treat.

Source: Slightly adapted from Two Peas and Their Pod