I was pretty oblivious to Lent and eating fish on Fridays until I got to high school. Even then, most of my exposure was making sure we chose somewhere to eat on Fridays that had fish for the one Catholic member of a traveling team I was on. Even during graduate school, I would forget. I once took pork egg rolls to a Friday gathering during Lent. Needless to say, my friends weren’t super thrilled with me.

While I still don’t observe Lent, I am making a conscious effort for my family to eat more fish these days. We all know fish is good for us – low in fat, low in cholesterol, high in omega-3s, good source of protein. But I find most people, like myself, are hesitant to cook fish. Maybe it is fears of “fishy” smells or tastes or overcooking it. I know I seem to hold fish dishes to a higher standard of needing to be “amazing” to be worth the effort.

This fish dish actually exceeded my expectations, which is pretty rare. The flavors were light, refreshing, and still filling. Even my toddler ate a few bites, although I did tell her it was chicken. Enjoy! 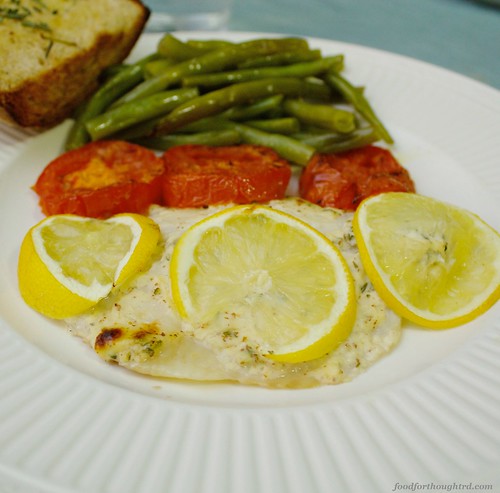 4. Combine mayonnaise, herbs, and mustard in a small bowl.

5. Remove pan from oven. Scoot tomatoes and green beans to make room for fish. Place fish in a single layer on tray. Spread mayonnaise mixture evenly over top of fillets. Place 3 slices of lemon on top of each fillet.

6. Return pan to oven and bake for 6 minutes. Leave pan in oven, but turn broiler on to high. Broil 3 minutes, or until fish flakes easily with a fork or reaches a minimum internal temperature of 145 degrees. Serve fish with tomatoes and green beans.

Recipe Notes: I admit to scanning this recipe when menu planning, and then being totally shocked when I went to make it. I missed that the original recipe included breadcrumbs on the fish, which I wasn’t in the mood for. If I want breaded fish, I’ll buy fish sticks, thanks very much. I also thought sliced tomatoes were much nicer for serving. The “sauce” needed a lot more herbs and mustard for my taste than originally called for. I had rosemary and thyme on hand, which was very tasty. The original recipe called for tarragon, which would also likely be delicious. I used horseradish mustard, but Dijon would also work nicely. Don’t be disheartened by the muted green color of the green beans when you unwrap the packet. I felt like they looked like they had come out of a can. But the taste was completely different and delicious.

4 thoughts on “Tilapia with Tomatoes and Green Beans”