When I was growing up, my family had a vegetable garden. Unfortunately, the only thing we grew very well was zucchini and yellow squash. I say unfortunately because my siblings and I HATED squash. And we had so much squash. Once, my mom gave a squash to every construction worker building a house in our neighborhood, just to get rid of it.

Thankfully, I have grown out of my hatred of squash, and this soup is one of my favorite ways to eat it. This recipe is great for anyone in my family’s former predicament, too, since it uses a lot of squash. And for your picky palates, it doesn’t taste overwhelming of zucchini, surprisingly.

If you are worried about little kids eating such a green soup, I have two suggestions. First, our family actually calls this snot soup. If that doesn’t gross your kids out, they might think it is funny. Second, I saw a similar soup on a different blog being called “Hulk” soup for kids. 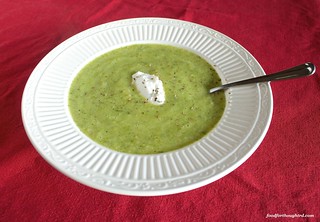 2. Add all ingredients to a large stock pot. Cover and bring to a boil. Reduce to a simmer, and cook for 30 minutes, or until vegetables are tender. (Keep lid on pot).

3. Remove from heat. Puree in blender or with an immersion blender. Serve hot, with a dollop of greek yogurt if desired.

Recipe Notes: I know it sounds gross to boil raw bacon. But it adds a creaminess to the soup that is very yummy. Just ignore how weird it seems and feeling like the mom from Better Off Dead. It won’t seem like enough liquid, but it works. Zucchini has a lot of water in it, so you don’t need to drown all the vegetables.

Source: adapted from a family friend